VMware’s Nicera and Cisco’s vCider, the perfect combo or the perfect storm?
At first glance the conflicting purchases of VMware and Cisco with Nicera and vCider (respectively) seems to be a shot across the bow.  Software Defined Networking (SDN) is an obvious emerging market that seems to have been waiting for large corporation support.  A quick evaluation of the OpenStack Quantum (://wiki.openstack.org/Quantum) plugins available reveals a list of SDN products that tend to be niche products in the SDN space, just the right target for acquisition by a major vendor such as Cisco or VMware.
Soon after VMware purchased the Nicera Platform (July 23rd, 2012), it seemed that every blog was detailing a relationship between the two companies that hinged more on necessity than interoperability, with the Nicera acquisition as a wedge intended to drive the two apart.
Recently (Oct. 4th, 2012), Cisco announced the purchase of vCider, a competing SDN product.  Again, the blogosphere was inflamed with articles about the similarities between the two products, and how this signals a division of ways for the two companies.  Interestingly, there have not been many articles written about the technical impact to consumers of either purchase, and rightfully so as the products will most likely undergo a full facelift before being integrated into the suite and sold again.
Unfortunately without a history of using Nicera or vCider and a lack of documentation (the vCider site has been all but removed of content since the acquisition) one can only speculate on the consumer impact of the purchases.  But in an environment of articles criticizing the purchase as a relationship strain, could consumers benefit from the purchases on either side?  I think so.
From what I can tell, the two products vary in market space and implementation technique so much so that the purchases seem to be more of a compliment than competition.  For instance, let’s take a look at Nicera.
Nicera, according to their documentation, utilizes a specialized vSwitch (or modification to existing vSwitch) to route traffic using SDN rulesets and features.  These virtual switches are controlled and managed via the NVP controller cluster, a highly available management cluster designed to receive and notify all switches of changes in the network fabric. 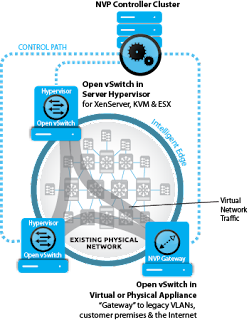 This mechanism is intended to serve as a way of virtualizing network in the creation of private clouds.  Sounds like a great acquisition by VMware to me.  These private clouds allow for the complexities of networks to be removed during the creation and movement of virtual environments throughout a private cloud, allowing engineers to focus less on the provisioning and management of networks, and putting the burden on software.  Again though, we are talking about Private Clouds here, notice that there was no mention of “the Cloud”, RackSpace, Amazon, etc…  This is by intention…
Cisco decided that vCider was their SDN vendor of choice for acquisition, but they don’t seem to be playing in the same space as VMware.  When analyzing the limited content remaining online, vCider appears to consist of two key elements.  These are a Linux network driver, and Cloud Burst Networking.  The Linux Network driver will present to the operating system within the guest, physical or virtual, to allow for connectivity to the cloud-based network.  In addition, the network traffic intended for another host within the cloud will be encapsulated by the driver and transmitted.  The Cloud-Burst Networking will then coordinate the transmission of data between the two remote nodes utilizing the cloud management for endpoint location.  Reference: ://etherealmind.com/cisco-value-in-vcider-is-all-programmable-networking/
Due to the host-based approach, and lack of interoperability with alternative operating systems (in current form), one must assume that this strategy is built around the connectivity of disparate nodes to a public cloud offering rather than private cloud.  If this is the case, then when an organization purchases a Linux-based node on the Amazon Cloud, this node can be configured with the network drivers, without any interaction at the hypervisor or lower levels such as network equipment that are out of the realm of configurability for public cloud consumers.
There are a few areas that the
re may be overlap though.  For instance, Cisco may develop the vCider connectivity to reside within their Nexus 1000v switch, therefore allowing the device to connect private-cloud switches to one another emulating the capabilities of the Nicera product.  In addition, Nicera does have a service offering for “Physical servers and legacy VLANs or for connecting virtual networks to the Internet” which will allow for the core functionality of the vCider product to be duplicated by Nicera.
Without more knowledge on the acquisition, or information about how the products will be used with respect to their new owners’ service offerings, this article is entirely speculation.  But in my opinion, these two products seem to fit as well together as they do separately to provide end users with a means to virtualize networks in private and public cloud scenarios.